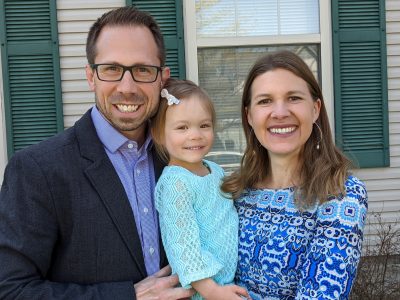 Chad and Christy Helmer
Chad came to know Jesus in 1997 through the ministry of Athletes in Action. In 2005 he graduated from Ohio University with a B.S. in Computer Science and married his wife, Christy. Chad worked in the information technology industry for three years before he and Christy joined the staff of Cru at Ohio University in 2007 and began directing the ministry in 2011. He has an M.Div. from Trinity Evangelical Divinity School and a Ph.D. in Systematic Theology from Durham University, UK. He enjoys reading, reading, and when he’s not doing that, he also does a little reading.

Christy is a native of Dublin, OH. As the daughter of a pastor, she placed her trust in Christ when she was very young. She also graduated from Ohio University in 2005 with a B.A. in Journalism. She loves traveling, especially to the beach, as well as event planning, listening to audiobooks, getting good deals, and spending time with friends. She and Chad met through their involvement in Cru as students at Ohio University. Together, they like to pedal Athens’ scenic bike path, exercise, and host Cru staff and students in their home. Their daughter, Lydia, was born in February of 2018. 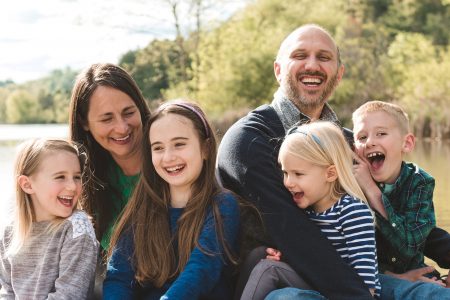 Jason Hoffman joined the staff team at Ohio University in 2004. Jason serves with the men at Ohio University and is the Partnership Leader for Southeast Ohio Cru’s partnership in South Asia. He loves getting to know students personally, seeing their lives transformed by Christ, and then seeing them go to the ends of the earth to help fulfill the Great Commission. He enjoys playing basketball and soccer, watching football, and reading.

Kacey joined Cru staff in 2005 after going on a summer mission with Cru where she learned how to share her faith, study the Bible, and walk more closely with Jesus. Growing up she had questions about God, but didn’t know where to turn. Heading to college she found others in Cru who loved the Lord and loved each other, and talked about God! She serves the women’s ministry and is co-directing Cru in Southeast Ohio this year. She has a love for studying the Bible and learning about others’ lives.  She enjoys laughing and being surrounded by her kids, family, and friends. Jason and Kacey have four beautiful children: Maddy, Caleb, Gabby and Julia. 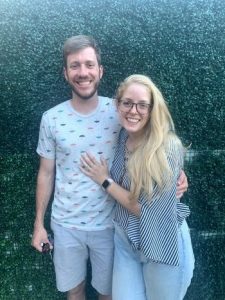 Clay joined the staff team at Ohio University in 2016. He considers it an incredible privilege to help students come closer to Jesus at his alma mater. Clay is very passionate about helping people engage with God’s word and in the lives of others. He is originally from New Philadelphia, Ohio, and graduated from OU in 2012 with a degree in education. He is a Cleveland sports lifer who loves spending time with his kids, playing ultimate frisbee, and can quote The Office at length. An avid runner, you can probably find him somewhere on the bike path during his downtime.

Emily joined the staff team at Ohio University after graduating in 2013 with a degree in commercial photography. She primarily runs communications for our staff team. Emily loves Jesus, loves college students, and wants everyone to have an opportunity to know who Jesus is. She and Clay both believe that college students will be a huge part of seeing people all over the world hear about Jesus. She enjoys hiking, running, camping, reading, and photography. Emily and Clay also love spending time with their sons Elliott (age 4) and Judah (age 2). 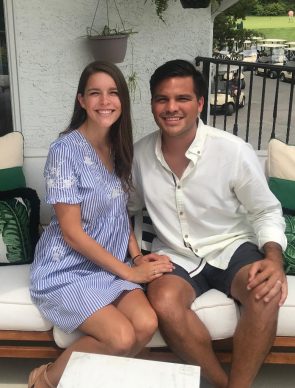 Carlie joined with Cru in 2017 and works with the students on South Green at Ohio University and women in sororities. God used Carlie’s time as a student at Ohio University to give her a passion to share her faith with others, and now she gets to spend her life coming alongside young women and showing them the beauty of the gospel. In her free time, she enjoys cooking, hosting parties, hand embroidery, watching documentaries with her husband and sweets.

Jeffrey interned with Cru at Ohio University in 2016 and joined staff with his wife in 2017. He works with the students on South Green and also works with fraternity men. He graduated from Cal State Fullerton and joined with Cru at Ohio University because he wants to mobilize college students to live their lives on mission. When he’s not hanging with college students, he enjoys world history, writing stories, reading with his wife and shredding on his American Fender Stratocaster HSS. 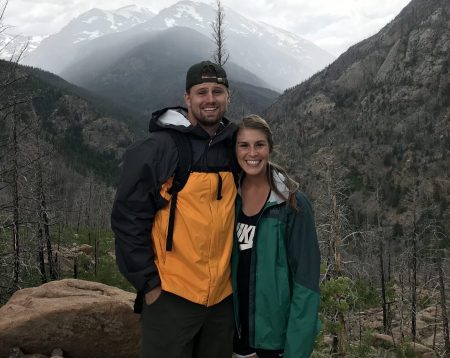 Jake started walking with the Lord in 2015, his junior year of college through the ministry of Cru in Southeast Ohio. He played baseball at Marietta College and graduated in 2017 with a B.S. in Land and Energy Systems Management and joined the staff of Cru at Ohio University. He knew at the time of graduation that he couldn’t see himself doing anything other than participating in the work that God is doing through the ministry of Cru in Southeast Ohio, and around the world. Jake enjoys reading, working out and eating.

Gabrielle is from Worthington, Ohio and came to know the Lord at the age of five. She played tennis and graduated from Grace College in 2017 with a B.S. in Marketing and Masters of Business Administration. She worked at Grange Insurance until she felt called to join staff with Cru at Ohio University. She enjoys hiking, walking and anything outdoors. Jake and Gabrielle met through mutual friends at an annual Cru Winter Conference in Indianapolis. They were married in April 2019. 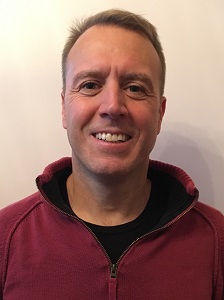 Bill joined the staff team at Ohio University in 2011. He works with Athletes in Action and the Valor Military Ministry and also serves with the men at the University of Rio Grande. Bill retired from the Army in December of 2010 after 21 years of service and has had the privilege of leveraging his military experiences to help lead the Valor Military Ministry on campus at Ohio University.  As a former collegiate athlete, Bill loves the opportunity to connect with student-athletes at the University of Rio Grande and point them toward Christ. Bill is married to his incredible wife Catherine, with whom he has four great kids — family is one of his greatest passions.  Fitness is also a passion of Bill’s. He stays connected to this by serving as a fitness instructor and triathlon coach through Ohio University’s Staff and Faculty fitness center, WellWorks.  Bill also serves as the faculty advisor and race director for the OhioHealth O’Bleness Hospital Race for a Reason. 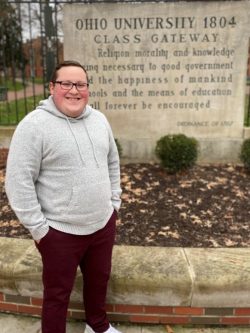 Joe grew up in a family that valued a relationship with God and became involved with Cru at OU as a freshmen. It was through his time at OU that God led him to pursue college ministry after he graduated in 2017. Joe joined the team as part-time staff in the fall of 2019. He has a passion to come alongside young men and help them grow in their relationship with God. Joe enjoys playing sports (mainly basketball), spending quality time with friends, and is always down for a good road trip. 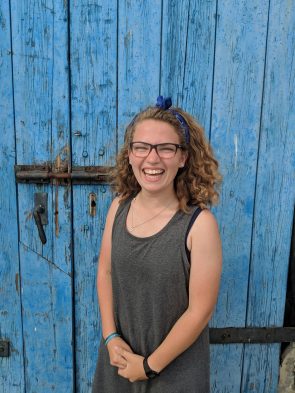 Erin joined staff with Southeast Ohio Cru in 2019. She studies Leadership Ministry with an emphasis on Ministry to women through Moody Bible Institute’s online program. Erin decided to join staff because as a freshman at Ohio University Lancaster, she saw a woman give her life to Christ and got to be a part of helping her grow in her faith. Finding so much joy in this process, she decided she wanted to do ministry with her life! Erin loves to laugh but also have deep conversations and she welcomes a movie marathon at any moment! 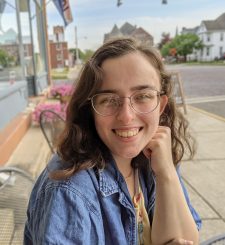 Amber came to know Jesus when she was around 6 years old. She was super excited to read the entire Bible shortly after but was soon disappointed to learn that there was actually more to it than the picture-book “Beginner’s Bible” that she had read. Nevertheless, she has always had a passion for God’s Word and sharing the hope of Christ with others. Amber graduated from Ohio University Lancaster in 2020 with a degree in social work. She got involved with Cru at OUL and got to see firsthand how impactful being involved in a college ministry can be. She is so excited to come alongside students in their walk with God and give them the opportunity to grow in their faith in the way that she did through Cru. Amber loves reading, writing, spending time with others, and watching Phineas and Ferb in her free time. 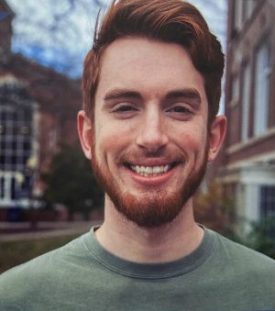 From Parkersburg, WV, Brandon surrendered his life to Christ in his senior year of high school. Seeking Christian community at Marietta College, he got involved with Cru and eventually went on summer mission to Ocean City, NJ, where he felt led to intern with Cru at OU after graduating with a bachelor’s in biology in spring 2022. Brandon enjoys disc golf, indie folk, and iced americanos. Compassionate for the vulnerable and burdened, he wants to share how God is our refuge and greatest joy. 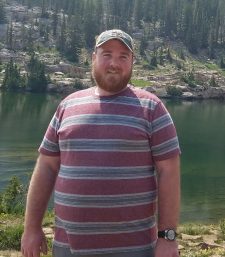 Jacob began walking with Christ in 2016, during his freshman year at Ohio University. He is an Actuarial Sciences major who is taking a break from his degree. While he’s not working at the Ohio University Credit Union, Jacob volunteers with the Cru staff team, meeting many technological needs at weekly meetings and retreats. He enjoys reading, painting and listening to and playing music.